I’ve been communicating with a parent about options for her son, outside resources such as speech therapy and ideas for developing social skills.  As I was writing an email to her this morning I thought it might be a good thing to share here.

We are working with her son on how to approach others that have something he would like and how to handle it if another child wants a toy he has.  He just turned 3 years old but this could be any child and any of the ages we have here at Aldersgate.  Just think about it.  Your child has been alive for such a short time.  He has already learned to eat and feed himself, He has learned to talk, walk, play with toys and so much more.  It takes practice to  understand and handle social interactions.

The parent had explained that they were attending the Parents as Teachers playgroup and another group gathering.  Here is what I wrote;

All the exposure to play groups, etc. are great.  At his age I would try to stay a little more in the background and see if/how he is interacting with others.  This will give you an idea of how to work with him at home or at future gatherings.

For instance, you can actually practice the sharing and turn-taking involved in playing with others while you play with him at home.  I would get involved in some play that has multiple pieces (i.e. blocks) and then ask him for a turn with what he has.  If he says no or just ignores you I would encourage him to use words to say if he doesn’t want to. “I’m still using it.”  Or “When I am done.”  If he would try to take something you have (and I would make yours pretty exciting so it would be something he would want) then you can tell him to use the words, “Can I have that.”  I would give it to him sometimes when he asks but other times I would say those same things to him – explaining that he can wait and you will let him have a turn later.  This will give him the chance to feel what waiting is like and to learn how to manage the disappointment of not getting what he wants right away.

As parents we feel funny depriving our kids of toys (while we are playing with them) since we are the adults – but, when we give things to kids right away, they don’t have a chance to practice the skills they will need when playing with other children.

This can also be true with following directions, etc.  If, as parents, we do things that the child is capable of doing for them (because we love them) we are actually depriving him of a chance to grow independent and to practice listening and then following one or more directions.  I would say at this age he should be able to hang up his own coat (or if this is too high for him I would find a spot for him to put it), throw his trash away and put his dish on the kitchen counter after meals, he could help get himself dressed and put on his own shoes (this might need some help once he tries a little).  In February we are going to have a focus on Responsibility for these little guys.  There are real benefits in having kids do “chores” around the house.  It is hard to believe but at three years old kids should begin being a helpful member of the household.  Watch for more on that coming soon.

I thought I would share a few of our kids working on those social skills while they play.  We practice everyday! 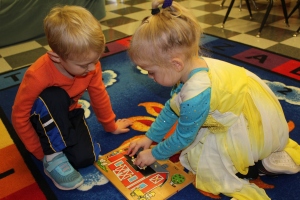 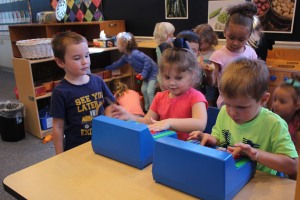